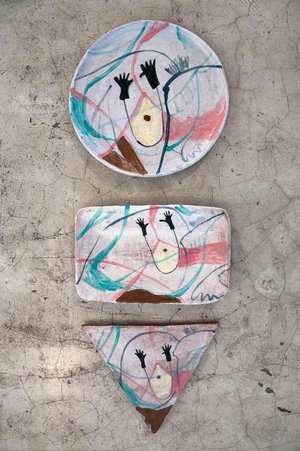 In her artistic practice, Merike Estna seeks for the conceptual integration of painting and daily life.

More specifically, Estna looks to expand and inscribe the languages, processes and applications of painting onto carefully thought scenographies and stage-setups, in which exchanges take place between groups

of participants and the often unstable, malleable connotations and formal qualities of painting.

Here one could think of the many events and encounters she conceives, among spa sessions, with painted robes, drinks and juices with painterly connotations, as well as the painted stages for performance and

video works, in which she seeks to reunite the fabric of painting with the fabric of social life—all whilst blurring and making ambiguous the roles of material entities as performers, subjects as objects, and

Estna’s work is thoroughly invested in the processes of painting, in her case employed as a way

of approaching the artwork as an integral part of daily life—painting as life, rather than about crystallising aspects of life. In her process-based work, Estna is embedding patterns and colour combinations derived from the crafts and applied arts, vocabularies which haven’t traditionally been accepted in the visual language and discourse of painting. In so doing, her work is challenging the masculine territory of painting and questioning the strict visual separations and oppositions between the discourses of painting and craft. Initially subjecting canvases to such patterns and application-based treatments, Estna has gradually progressed to cover clothes, objects and entire spaces with cotton wool colours, gradually expanding

her research into colour schemes, gradients, and the acts of painting applications, towards a widening

of the possibilities of experiencing and looking at the painting act more-dimensionally.

Here it could be claimed that Estna is pushing painting into a discomfort zone, posing questions around what is “sincere” abstract art, enhancing this disquiet even further by the use of unconventional materials that are not generally considered “painterly,” such as apparel, food and liquids. Some of her works could be envisioned as a space for wellbeing, or “well-beings” rather, in which painterly dimensions and applications form the unifying element, whilst underscoring acts of collectivity, togetherness, attention, adaptation and energy-exchange. The work is often activated by visitors, whereas the painting element is initially invisible and will gradually unfold: appearing within the books on display, the glasses or drinks served.

Her installations become a meeting point for discussing adaptation and survival modes, in which painterly properties take on liquid shapes within an equally " fluid and networked society.

a viewer: One can step on painting, eat it, wear it. Painting spills over to the floor; it takes the form

of cakes, cocktails, books, and videos, while the vivacity of light pastel colors and vibrant patterns

immerses the visitor in an overall sensory-cultural experience. On entering the expanded space

of painting, one finds the hierarchies separating it from the decorative arts and everyday life dissolving.

The installation is filled with all sorts of objects. But whatever they are – hats, pieces of clothing,

strips of canvas, ventilators, TV screens – all aspire to one single thing: to be paintings.

The young London-based Estonian artist challenges the tradition of abstract painting, from color and composition, form and materials, through display and perception. Estna conducts her rebellion against convention with lightness and humor. Heroic macho abstraction is replaced by tongue-in-cheek patternmaking. By choosing pastel blues, yellows, and pinks, Estna pushes painting to a discomfort

zone- can such combination be treated as serious abstract art? And who makes the decision?

This disquiet enhanced by the use of unconventional materials that are not generally considered “painterly”, among them apparel, food, and liquids. The pieces of clothing, hats, TV screens, and other objects are not integrated into paintings on canvas; rather, painting itself is integrated into the array of things dispersed around the exhibition space on the floor, on a rack, or hanging from the ceiling.

Finally, with the immersive display, Estna destroys the privileged single point of view for exploring

a paintings and for the installation as a whole. She challenges another old norm of painting- the Greenbergian value of flatness- by removing a painting from the wall and putting it into various, often

slightly bizarre situations. The video Traveling with a Painting, 2013, shows Estna taking a canvas off its stretcher and placing it outside in a wintry landscape, creating various sculptural shapes with it as she manipulates it. The canvas becomes a character in a sort of adventure story. One finds oneself purposely disoriented visually, spatially, and, finally, art-historically. By dismantling the established structures

of perception, Estna makes us question our assumtious about how to look or engage with art objects

and things in general. The conventional rules of those encounters are reversed: While paintings gain

the quality of “readiness-to-hand”, to use Heidegger’s famous term, articles of clothing become things

to look at. Estna treats painting as a constant negotiation between artistic authority and the viewer’s perception: Being everywhere and nowhere at the same time, painting becomes a state of mind.